SCFI: Friday, by the Shanghai Shipping Exchange The Shanghai Export Container Freight Index (SCFI), published by the Shanghai Shipping Exchange, rose 0.36% to 4162.69 points due to the phased unsealing of Shanghai, resumption of work and backlog of cargoes out of the cage, led by the Mediterranean and European routes up 0.2% and 0.03%, ending a 17-week decline, but the U.S. East route was unchanged from the previous period and the U.S. West route was down 0.15%.

NCFI. The Ningbo Export Container Freight Index (NCFI) released by the Ningbo Shipping Exchange closed at 3,480.6 points on the 20th, up 0.6% from last week. 12 out of 21 routes saw a rise in the NCFI, while 9 routes saw a fall in the NCFI. 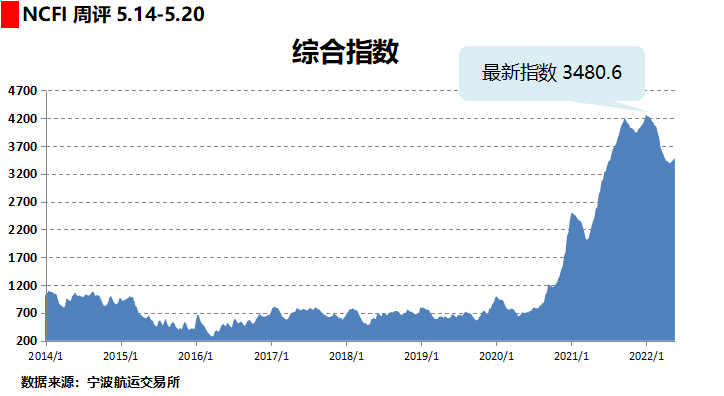 FBX:"The latest edition of the Freightos Baltic Index (FBX) showed that in the trans-Pacific freight sector, rates from Asia to the US West rose sharply by US$1,186 to US$1,360. surged by US$1,186 to US$13,698 per FEU (including premiums). For the US East, price volatility on the FBX was more moderate down US$51 to US$15,931/FEU. Asia to the Mediterranean/Nordic rose 2% and 0.2% to US$12,833/FEU and US$10,583/FEU respectively, and the market expects spot rates to accelerate as the expiry of labour contracts at US West Coast ports approaches on 1 July. In addition, shipping lines are reporting strong demand for trans-Pacific services despite inflationary pressures on US consumers. Some carriers are limiting their committed contract business in favour of what is expected to be more lucrative spot freight business.

WCI: According to the latest Drewry data, on the major transpacific, transatlantic, Asia-North Europe and Asia-Mediterranean routes, 73 of the approximately 742 scheduled sailings from week 21 to week 25 (May 23 to June 26) will be cancelled, with 71% of these empty sailings occurring on the eastbound transpacific routes, mainly to the US West. (Check out the article: 58 sailings cancelled by the three alliances! 71% of the empty sailings occurred on trans-Pacific routes! (with a summary of stoppages and port hops) 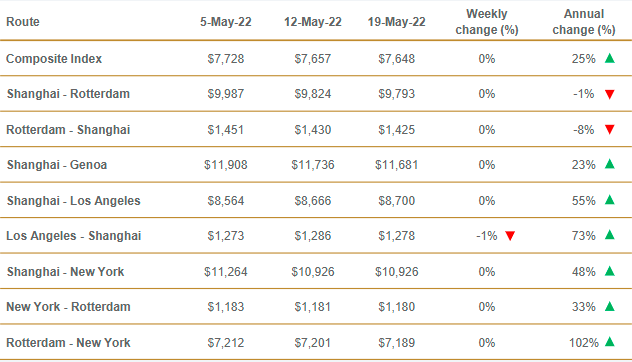 The Drewry Composite Average Index WCI fell slightly by 0.1% to US$7,648.18/FEU for the period, but is still 24.7% higher than the same period in 2021. Rates for Shanghai-Rotterdam, Shanghai-Genoa, Shanghai-Los Angeles and Shanghai-New York hovered around the levels of previous weeks. Drury expects spot rates to remain stable in the coming weeks. The Shanghai blockade is expected to end in June and the restrictions will be gradually lifted, Drury said. A sudden return to near normal levels of manufacturing and general economic activity could have some impact on an already overstretched global container distribution system. Once Shanghai reopens fully and the manufacturing engine starts to heat up, there could be a surge in US and European containers. In addition, US import demand remained strong in April, despite inflationary pressures and epidemic restrictions. If trade remains strong, port congestion in the US and Europe could worsen significantly, causing further delays and costs to already struggling shippers.

However, due to the limited increase, a number of shipping companies, freight forwarding practitioners said that this is the signal for the price to stop falling and stabilize, after all, the Shanghai epidemic sealing control nearly two months of greater impact, the entire supply chain to restore smooth operation needs time, is expected after the Dragon Boat Festival, in mid-June, the full resumption of the entire volume of cargo to be released, the trend of freight prices will be clearer, only high cargo volume to drive high prices. Maersk's latest Asia-Pacific report predicts that the epidemic can be controlled, meaning that port throughput will soon be expanded, the capacity of the route to the United States may increase, the backlog of goods will continue to pour into the U.S. West port, fearing that a new wave of supply chain bottlenecks.

Recently, Hamburg in Germany, Rotterdam in the Netherlands and other European ports, because of the hurricane caused by the effect of port congestion, coupled with the increase in cargo volume, Yang Ming and other shipping companies have informed their customers, European shipping line freight rates from June onwards, every 20-foot container up $ 250 up and down, every 40-foot container up $ 500 up and down. According to industry observation, late May began to export cargo gradually increased, the current booking situation in early June, the United States line flat, European line rose slightly, then into the third quarter of the traditional peak season of shipping, looking forward to rolling effect, can be delayed in the second quarter of the volume of goods in the third quarter to make up, plus meet the end of the procurement season new orders, optimistic about the second half of the year ushered in a wave of shipments.

Previously, in March and April, manufacturers clearance inventory to rush shipments, shipping companies can still maintain a certain amount of loading, in May, the volume of cargo becomes less, many carriers launched empty flights to respond, effectively supporting freight prices. The industry predicted that the tide of shipments in June.