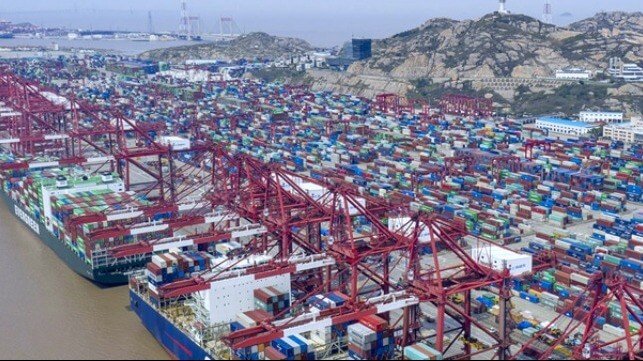 Predications are growing throughout the shipping industry of renewed disruptions, backlogs, and even possibly “chaos” as China works to ramp up operations at Shanghai and resume manufacturing and supply chain operations after the eight-week lockdown due to its zero-tolerance COVID-19 policy. Vessel diversions increased rapidly starting in mid-April resulting in a growing amount of export cargo not shipped and now the restart in operations is expected to come just as the shipping industry traditional moves toward a peak season as retailers build inventories for the end of summer and then holiday season sales in the U.S. and Europe.

A new survey of 200 individuals from across the container logistics industry conducted by logistics platform Container xChange forecasts that this year’s summer peak season cargo surge will be even more chaotic for global supply chains than the 2021 peak shipping season. Half of the respondents to the latest Container xChange survey “xChange Industry Pulse Survey” said they expect the 2022 peak season to be “worse” than last year. A further 22 percent expected similar challenges to 2021 while only a quarter said they expect this year’s peak season would be less chaotic than in 2021.

This comes despite the dramatic progress made by ports around the world in reducing or eliminating their backlogs. In the U.S. for example, Charleston recently said that its congestion was eliminated with at most one or two containerships waiting in the anchorage. Similarly, the twin ports of Los Angeles and Long Beach are reporting that they have reduced congestion by two-thirds. The Marine Exchange of Southern California reported yesterday that only seven container ships were waiting at the anchorage with an additional 30 having made reservations and slow steam or waiting further out to sea. That is down from a peak of over 100 containerships waiting at the beginning of 2022. 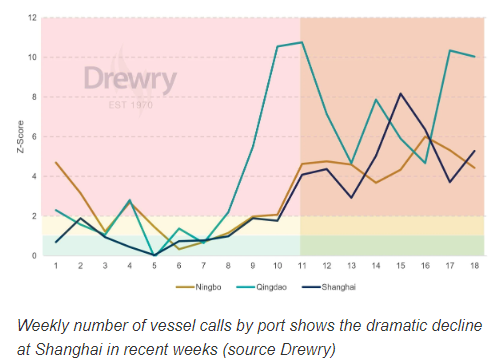 Maritime research firm Drewry highlights the impact the Shanghai lockdowns had on container shipping. They point to a slow decline initially in the number of vessel calls at Shanghai. Using AIS data, they calculate that “between the start of the lockdowns in weeks 11 and last week (week 18), the number of weekly port calls in Shanghai trended downwards by 2.5 port calls per week while at Ningbo and Qingdao the number increased by an average of 1.1 and 0.5 per week. That said, the reduction in Shanghai port calls accelerated considerably since mid-April .... the total reduction (over the past three weeks) was 31, or 26 percent, of which 25 were this last week.”

The peak container shipping season traditionally occurs in the third quarter of each year as retailers build up inventories. Container xChange highlights that last year, cargo surges resulted in record container shipping freight rates, delivery delays, port congestion, and declines in the reliability of container shipping services. A third of respondents in their survey said they are ensuring clients received enough inventory by “shipping early” in 2022 while another quarter said they were using alternate routes this year.

“Predicting exactly what will happen in this year’s peak season is harder than normal because there are so many contradictory signs and intangibles,” said Christian Roeloffs, co-Founder and CEO, of Container xChange. Saying if China proceeds to relax its lockdowns and restriction, he predicts “there’s every sign that we’ll see a substantial surge as backlogs of exports are shipped. If lockdown rules are relaxed soon and truckers are allowed to get back to work, then those backlogs will be arriving at the same time as peak season orders, which could cause a lot of supply chain blockages at ports in Europe and the U.S. where congestion is already widespread.”

Drewry estimates that up to 260,000 TEU of export cargo was not shipped from Shanghai in April because of the lockdown. In their analysis, they note, “This is the equivalent of 26 fully-loaded 10,000 TEU containerships, which will have to be found somehow in future months, as supply chains are reactivated.”

Given that the summer peak season is normally busier, Drewry concludes that the Shanghai rebound is likely to support a strong peak season and new capacity shortages.